Huge progress has been made over recent decades in improving the safety of child restraint systems, or child car seats, as most of us know them. All the same, these advanced systems only work when they are installed correctly.

Since 1 April 1993, it has been law in Germany that all children aged up to 12 who are less than 150 cm tall must use a child restraint system. Nevertheless, there is still room for improvement. For example, in a study carried out for the German Insurance Association (GDV), as many as 47.6 percent of the 1042 children who took part were found to be incorrectly secured. One of the study team members, accident researcher Gerd Müller, also reconstructed car accidents that resulted in child fatalities. According to his findings, a properly fitted child car seat would have prevented this worst-case outcome in half of the accidents. Furthermore, when these restraint systems are used correctly, children have even better protection than the adults they are travelling with. Clearly, something needs to be done to show people the correct way to install and use child car seats. That is precisely what another accident researcher, Prof. Darius Friedemann from the HTW Berlin University of Applied Sciences, is working on. He invited students to apply for a Bachelor’s thesis based around designing a child car seat demonstrator, and the successful applicant was Tamara Beber, who has independently planned, designed and built a solution. The demonstrator invented by the automotive technology student is mounted on a frame that uses profile technology and castors from item.

Beber was hooked the moment she came across the thesis topic Professor Friedemann was offering. As a mother of two, she is fully aware of just how important the issue is: “The best way to avoid mistakes is to physically show people the right way to install a child car seat in a vehicle. Mistakes are made so often when fitting these seats, and the consequences for a child’s safety are severe.” There is another finding in the GDV study mentioned above that shows just how important educational work like this is: Some 70 percent of the people who had not properly secured their children thought they had actually installed the car seat correctly. This shows it is high time to raise awareness of the frequent mistakes that are made when using child car seats. In the past, there were public training courses, but these were carried out directly in the car. The downside to this approach was that people watching the demonstration couldn’t really see exactly what was happening clearly and only a limited number of people could take part.

Fitting a child car seat? There’s more to it than you would expect

The child car seat demonstrator solves the problems of previous demonstrations by combining realism with a clear view for spectators. To achieve this, a rear car seat was fixed to a wooden panel that was fastened to a frame made of profiles from the item MB Building Kit System, which was mounted on castors. As the rear seat in a vehicle is secured to metal loops, the child car seat demonstrator has two vertically installed profiles that act as equivalent components. “The belts are directly integrated into the rear seat so that everything is the same as it is in a real car. A board has also been added to represent the footwell, because there are child car seats that are supported by an additional foot prop that rests on the floor of the vehicle,” explains Beber. Using a full-size rear seat means the people giving the demonstrations can compare the correct method of fitting a child car seat on one side with the typical errors that are made on the other.

Fundamentally, there are all kinds of errors that are made when fitting a child car seat and it is vital to differentiate between using a seat belt to fit a car seat and using the ISOFIX system.

Fundamentally, there are all kinds of errors that are made when fitting a child car seat and it is vital to differentiate between using a seat belt to fit a car seat and using the ISOFIX system. Cars that feature the standardised ISOFIX system have two metal loops between the backrest and seat. A child seat that is compatible with this system will have two snap fixings that need to be pressed against these loops so they latch onto them. While the ISOFIX system is relatively straightforward and secure, it’s a different story for the belt fixing system, as Beber explains: “When using a seatbelt to install their child car seat, people often feed the belt through the wrong points or have the seatbelt too high, so it’s running over the child’s neck.”

Modular solution for versatility in transportation

Mobility was a key requirement of the brief, as it is crucial the demonstrator can be used in as many locations as possible. Besides the buildings at HTW, the demonstrator could also be put to particularly good use at driving schools, nurseries and daycare centres. What’s more, the child car seat demonstrator had to be designed so it could be taken from one demonstration site to the next by one person driving an Audi A4 B8. In addition to meeting this requirement, the item frame even helps when it comes to getting the demonstrator into the car. The panel on which the rear seat is mounted, and which rests on the frame, simply rolls off the frame and into the boot (or trunk), thanks to two fixed castors fitted to its underside. The back rest of the rear seat is also folded forward before being loaded into the car. As it is built of aluminium profiles and, most importantly, because it uses Automatic Angle Bracket Sets, the frame can be disassembled in just a few steps so that the entire demonstrator fits into the car.

When we are using the demonstrator to show people how to fit car seats properly, it will definitely have an impact. I think there’s a very good chance that, if a child ends up in an accident, the consequences will be much less serious.

“The key advantage to the item profiles was certainly their modular design, as that meant I was able to make everything to suit my needs. I also designed everything using the item Engineeringtool, which was highly practical. If you have a little experience with engineering, the tool is really self-explanatory,” says Beber. Since this fixture for fitting child car seats is intended for events that people attend in person, it has only been used once so far, due to the coronavirus pandemic. After its premiere, Prof. Friedemann had the following to say: “The event was a complete success. Everything worked well and I was able to give a practical demonstration of the errors that need to be avoided. I’m already looking forward to future events. As an accident researcher, child safety in vehicles is hugely important to me.” Additional demonstrations are gradually becoming more of a possibility. All in all though, Beber has every right to be confident about the impact her project will have: “When we are using the demonstrator to show people how to fit car seats properly, it will definitely have an impact. I think there’s a very good chance that, if a child ends up in an accident, the consequences will be much less serious.”

Do you want to keep up to date on the various ways that item products are being put to use? Then we have the perfect solution for you. Simply subscribe to the item blog by completing the box at the top right. When it comes to ensuring cyclists’ safety, reliable bicycle testing technology is a must. Over 80 percent of all German households own at l ... 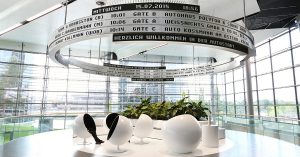