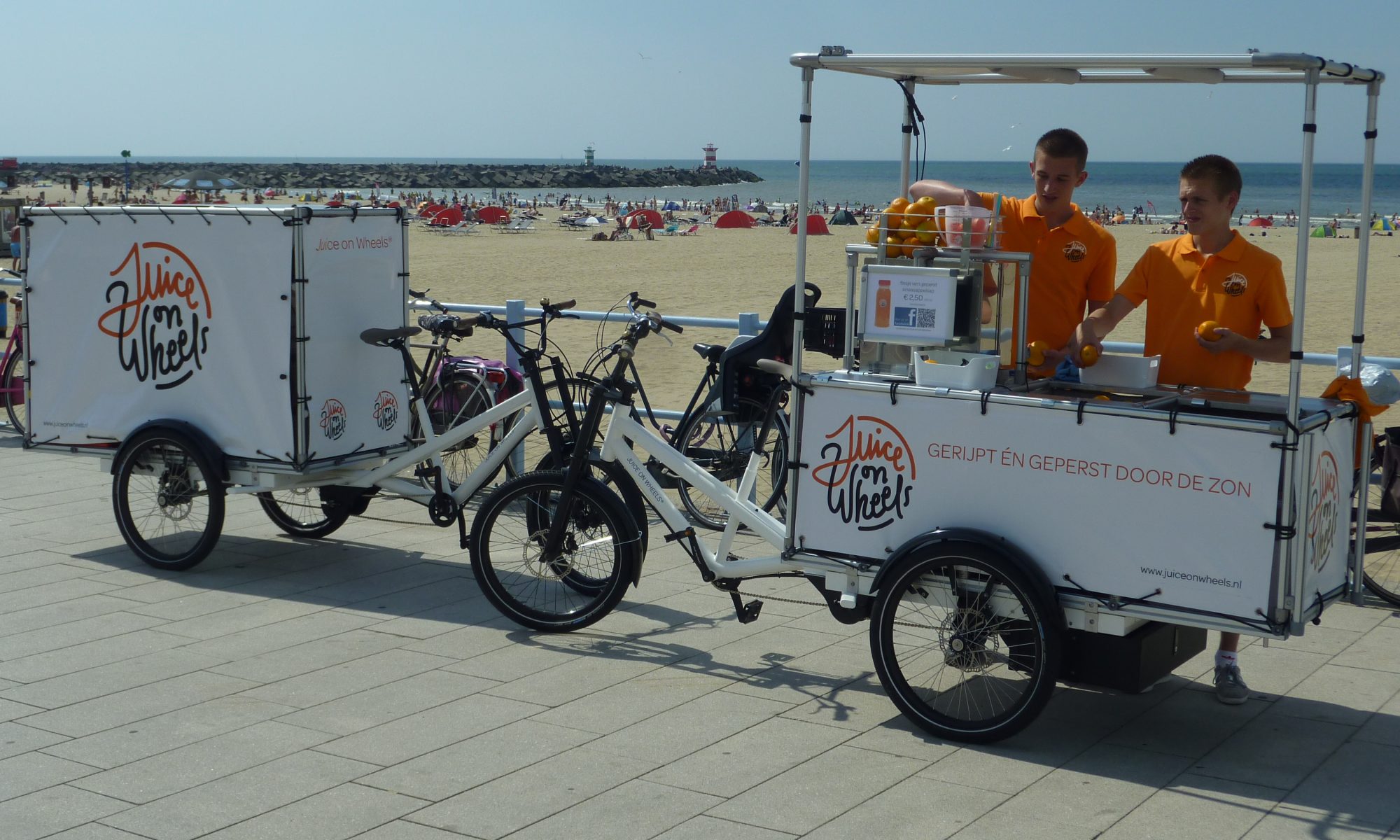 Juice on Wheels: Heading to Paris to save the climate

To show his support for better climate protection, the boss of “Juice on Wheels” leapt into the saddle of his D30 bike and rode to the UN Climate Change Conference.

As the end of the year draws closer, crowds head for the Christmas markets and of course the mulled wine starts to flow freely. But how about trying a tasty fruit juice instead? We want to throw our weight behind that option and so here is another blog entry on the fantastic “Juice on Wheels”. The mobile juice bar makes its tasty orange juice using an entirely environmentally friendly process. However, the bar’s founder, Peter Blesgraaf, went more than one extra mile to show how seriously he takes his commitment to the environment when he took his very special vehicle all the way from the Netherlands to a demonstration at the Paris Climate Change Conference (30 November to 11 December). 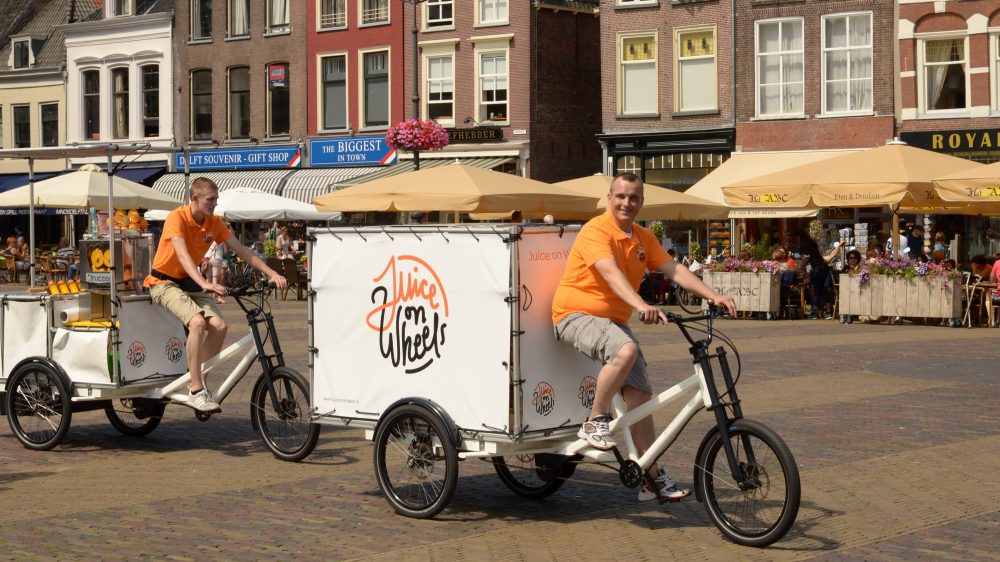 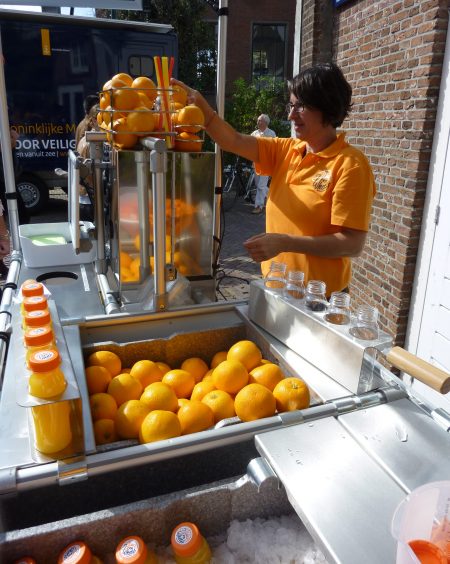 Blesgraaf was joined on his journey to Paris by five companions. Together they travelled from Nijmegen through Hasselt, Charleroi, Saint-Quentin and Senlis before finally reaching the French capital. While his fellow travellers rode normal bikes, Blasgraaf was of course on his trusty cargo trike. The mobile orange juice bar is built largely using technology from our Profile Tube System D30.

The riders enjoyed plenty of memorable encounters as they made their way to the conference. For example, just before they reached Saint-Quentin, the “Juice on Wheels” boss met a friendly organic baker who was out on the road and stopped to offer the cyclists bread and chocolate as soon as he spotted the unusual vehicle. The baker was very sympathetic towards their climate quest, and had only recently supplied food for “The Climate Miles” campaign. In a display of exceptional hospitality, he also provided a warm place to spend the night. 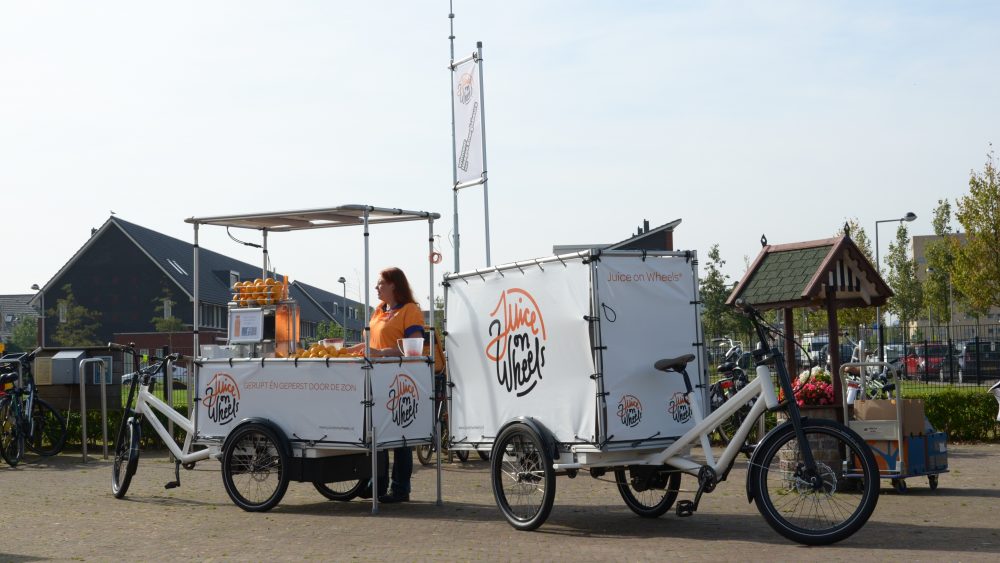 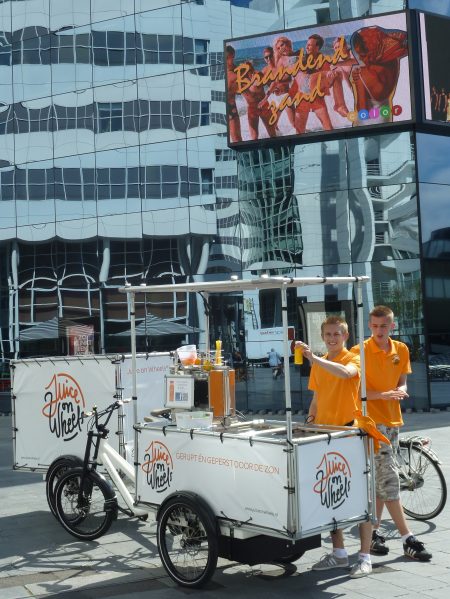 The journey was organised as part of a campaign by the “Tour de Climat” group, which aimed to get as many residents of Nijmegen as possible to the Paris Climate Change Conference. The high point of the entire campaign was to be joining the huge “La Marche pour le Climate” demonstration on 29 November. However, given the circumstances, it was not possible to stage such an event in Paris. Nonetheless, the alternative proved to be no less effective, with participants each donating a pair of shoes that would continue the “journey” to a better world on their behalf and be passed on to people in need.

So did everyone really hand over shoes? Not quite, Peter Blasgraaf didn’t have any spare footwear with him. Instead, he donated his spare tyres, which are sure to give their future owner plenty of service. He was visibly moved by the atmosphere in the city: “I had hundreds of spontaneous and inspiring discussions. The people in Paris showed huge commitment to the issues of peace and climate change.” Blasgraf also met André Kuipers there, who is by far the most famous astronaut to have come out of the Netherlands. He has been to space twice and holds the record in Western Europe for the longest stay in space, at 192 days.