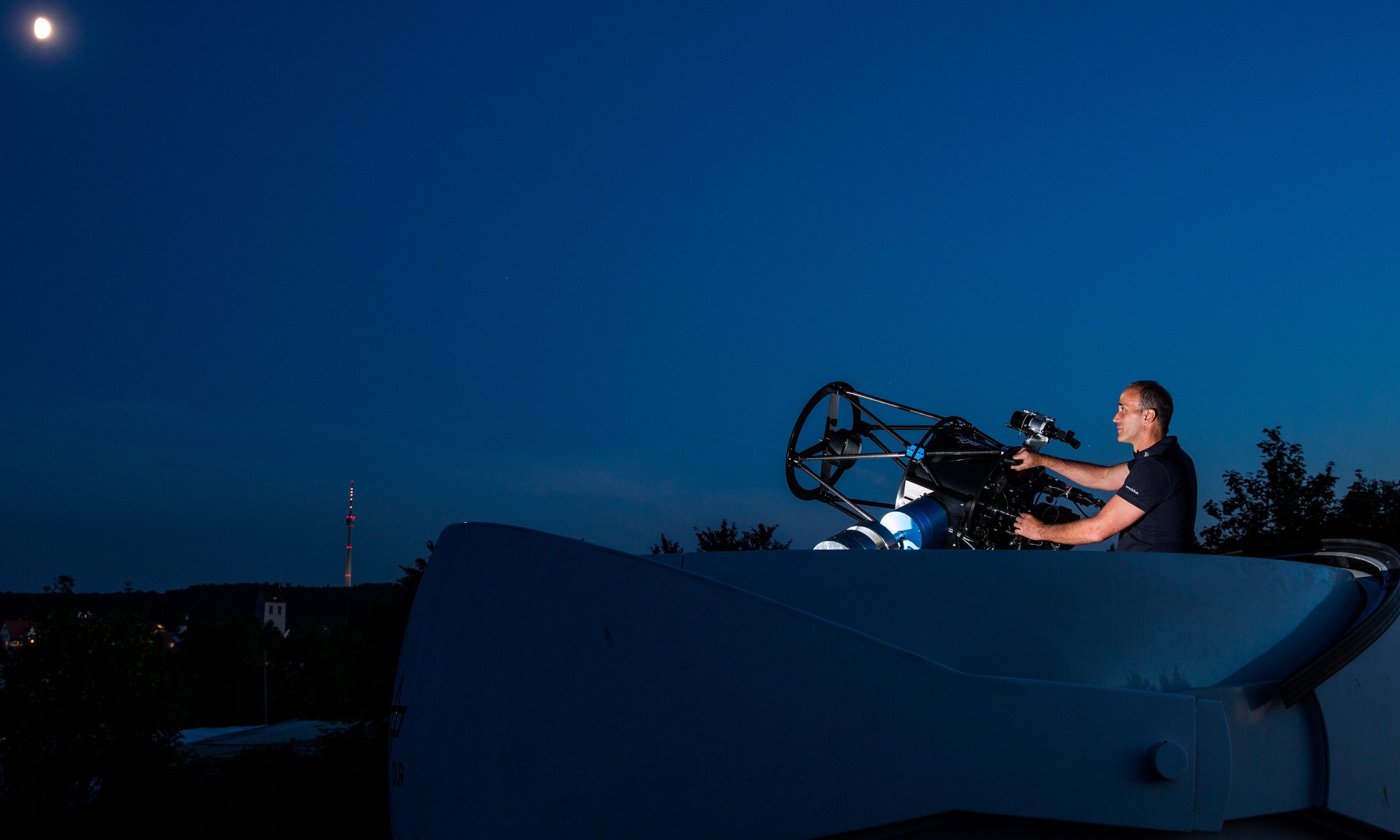 Researchers at the German Aerospace Center (DLR) are working on solutions to reduce hazardous space junk and are using components from item.

When dusk draws in, all eyes at the Institute of Technical Physics of the DLR in Stuttgart are often turned towards the heavens. Even though the Sun is still shining in a low orbit around the Earth, it is already dark enough to make effective use of telescopes on the ground. In fact, it is at this time that the copious amounts of debris generated by decades of space exploration reflect the last light of the day, allowing scientists to track them based on elevation and azimuth angles. Scientists can determine the trajectory of a piece of debris to within metres using a distance measurement technique developed by the DLR. The technique is based on how long it takes laser light to travel from the ground to the debris and back again. For this system to work, the DLR uses, among other things, a special structure built using components from our MB Building Kit System. 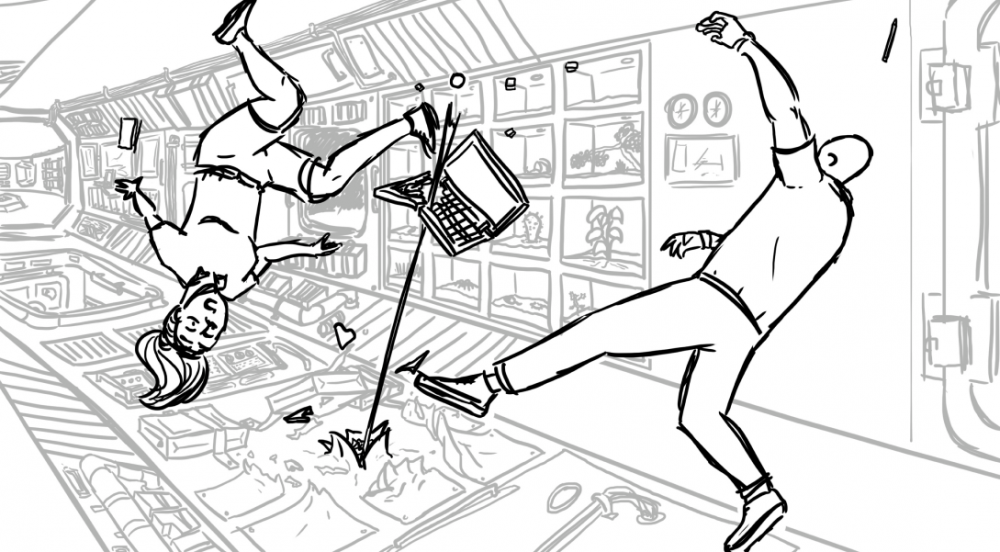 There is certainly no shortage of possible targets for the researchers in Stuttgart. There are an estimated 750,000 items of debris orbiting the Earth at various heights, ranging from a few centimetres across to faulty satellites weighing tons. “Objects measuring 10 centimetres or more that are orbiting close to the Earth at an altitude of up to 2,000 kilometres are particularly problematic. Some 17,000 objects bigger than 10 centimetres have been detected internationally to date,” says Wolfgang Riede, head of the department for Active Optical Systems at the DLR’s Institute of Technical Physics. According to estimates, there are 28,000 of these larger items of debris in total.

The hull of the ISS has been designed to resist impacts with debris measuring up to 1.4 centimetres.

What makes space debris on this scale so problematic is the widespread use of low Earth orbits for commercial satellites and manned space travel. Even the smallest items of debris will damage the solar cells of satellites and reduce their performance capabilities. Travelling at speeds of eight kilometres a second, a collision with an astronaut on a spacewalk could have fatal consequences: “The hull of the International Space Station has been designed specifically to resist impacts with space debris measuring up to 1.4 centimetres,” explains Riede. If an impact with larger items of debris is likely and there isn’t enough time for evasive manoeuvres, the only option for the crew is evacuation via the Soyuz escape pod and the abandonment of the 100 billion-euro station.

To make sure it doesn’t have to come to that, the DLR’s Institute of Technical Physics is developing laser-based ground station technology. According to Riede, this concept has one particular key benefit: “Laser propagation time measurement is 90 percent cheaper than the usual radar-based method of detecting space junk.” However, there is also a down-side to the method – it relies on visual contact with the junk and therefore needs suitable weather conditions.

The weather is always good somewhere.

A dense network of monitoring stations is needed if satellite operators and international space agencies are to be supplied with precise projected trajectories. “The weather is always good somewhere, and gaining maximum coverage of the sky would also boost the quality of projections,” says Riede. The starting point is to find locations with optimum conditions for astronomers, such as the Canary Islands, Chile and Hawaii. In the ideal scenario, these would be extended with more sites located as far to the south and north as possible. 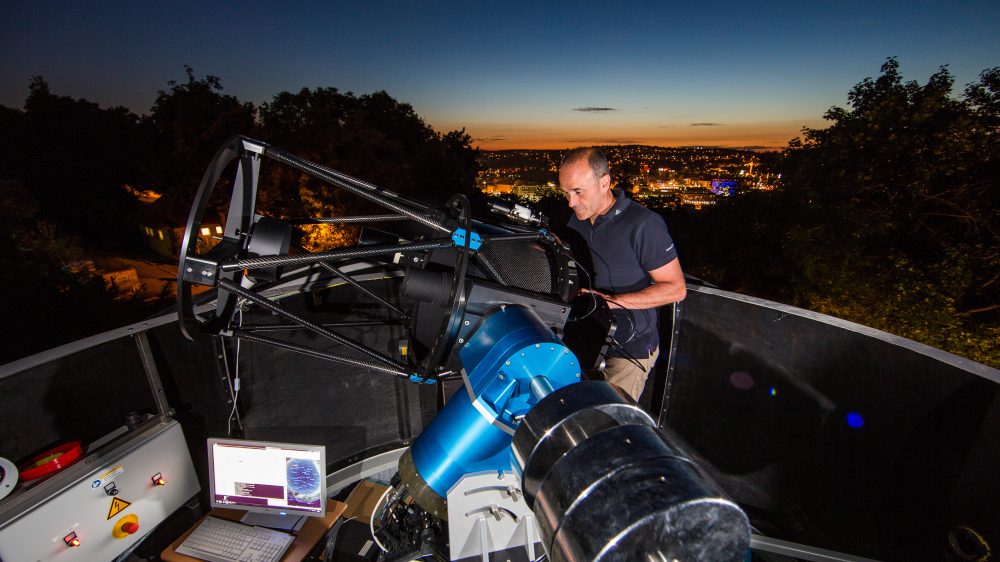 To fill in the blank spots in coverage on the monitoring map, the system is also being designed in a version that can be transported. All the necessary technology fits into a 20-foot container with an integrated power supply. In total, the mobile monitoring station weighs almost ten metric tons. Once it arrives at its deployment site, the roof of the container is opened to provide an unrestricted view of the sky for the securely mounted dual telescope within. This comprises one transmitter telescope that emits the laser and another 17-inch telescope that acts as a receiver for the laser on its return.

The laser itself is located in a box underneath the mount for the dual telescope and is routed directly to the transmitter via a coudé focus. Together, the box and mount shield the laser beam from the outside world, so that high-frequency lasers can be used without any limitation on pulse energy. It is inside the box, which is made from Profile 8 40×40 light in black and black anodized aluminium panel elements, that the high-precision laser beam is aligned, which means the area must always be completely free of dust. The protective enclosure, which the laser cannot pass through thanks to additional accessories from item, satisfies two crucial requirements. Firstly, it shields the laser from outside influences such as weather, excessive temperature fluctuations and dust. Secondly, it ensures people in its immediate surroundings are reliably protected from the dispersion and reflection of the laser beam. “Thanks to the modular design, repairs and corrections can be made to individual elements at any time. This gives us the flexibility we need when working with optomechanical systems,” says Riede, explaining why item components are used so frequently.

In the long term, a network of cost-effective monitoring stations could play an important part in preventing the generation of new space junk. When working with accurately projected trajectories, satellite operators would be able to initiate evasive manoeuvres in good time. Every sizeable collision in orbit increases the risk of a domino effect that could generate a lot more additional debris. “The more time and effort that is invested in avoiding the generation of space junk when planning new missions and preventing collisions, the more easily the problem will be contained,” points out Riede. Once a critical point is reached, costly new processes will have to be developed to clean up the junk-filled lower orbits around the Earth. Until the junk is cleared, the entire area will be unusable for space travel.

Do you want to keep up to date about innovative ways that item solutions are being put to use? Then we have the perfect solution for you. Simply subscribe to the item blog by completing the box at the top right! 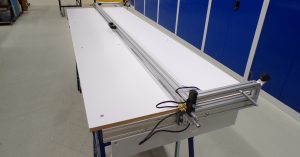 Research at the Institute of Hydraulic Engineering and Water Resources Management

Water is a serious business at RWTH Aachen University.   Research at the renowned Institute of Hydraulic Engineering and Water Resources Man ...

Sometimes it’s the ideas that seem weird that ultimately produce the most fascinating results. Those were the days – if you grew up in the 1 ... How the Faculty of Building Services, Energy and Environment is using an intricate structure to simulate wastewater flows.  Esslingen Univer ...