How a clever idea and the benefits of our building kit systems come together to create bespoke, innovative cargo bikes.

Burgeoning urbanisation in most industrial nations is changing the face of urban traffic. Once the first choice for all forms of private transport, today the car is often relegated to second place behind the cargo bike when it comes to getting the kids somewhere or doing the weekly shop. Long before the current trend took hold – one that is now being served by a wide range of suppliers – Sven Bastiaen Schulz decided to build his own cargo bike. Since then, he has continued to build on his initial idea. 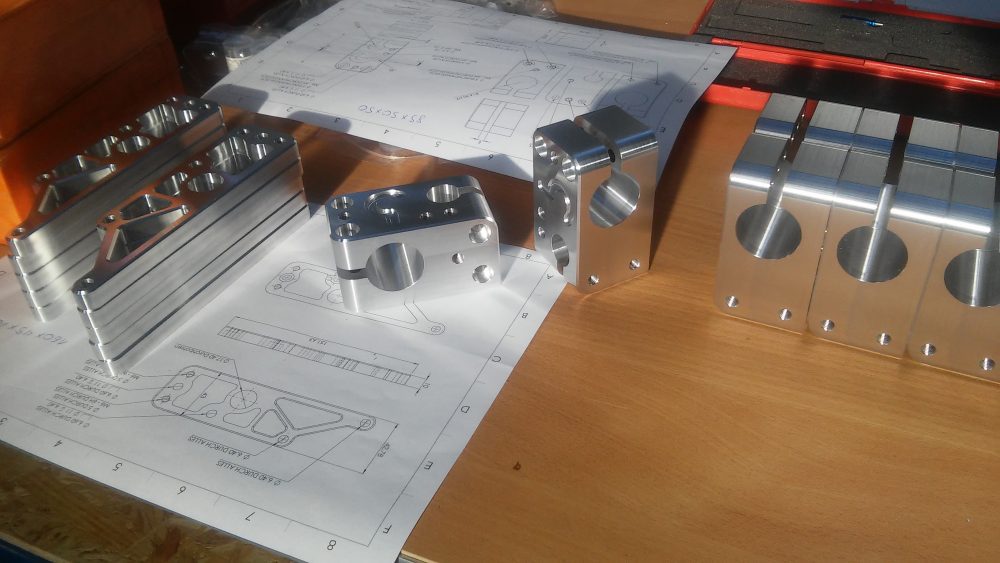 Although his first model, designed for his own personal use, was cobbled together from old bits of scooters, the feedback he received from both friends and strangers quickly highlighted the huge potential of his design. However, it was also clear he would have to meet far more stringent requirements in terms of material quality and production conditions. The ultimate aim was to produce a lightweight, maneuverable cargo bike with single-sided front wheel suspension, like that on a car.

A design such as this, which doesn’t have a fork to get in the way of things, offers numerous advantages. In a direct comparison – including with many commercially available cargo bikes – the item cargo bike can carry up to 50 percent more cargo and is almost 20 percent shorter and lighter at the same time. What’s more, a seating unit or child seat can be integrated so that children can sit face-to-face with their parents while they ride. As there is plenty of space for a transport crate under the seat, there’s also no need to make that tough decision between carrying your kids or your shopping, either… 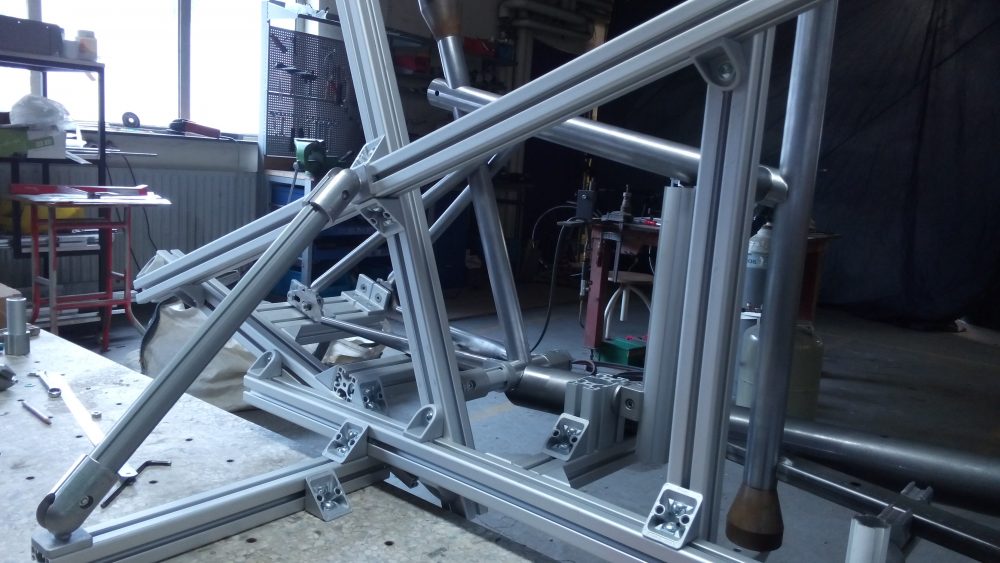 Efficient production operations require the use of special tools and cutting-edge manufacturing processes. Examples include the pressing tool for the front wheel and the use of laser-cut tube sets that are uneconomical for a single example. When the prototype produced in 2015 and exhibited at a trade fair in Berlin in 2016 met with a very positive response, a plan was set in motion. A small series of ten cargo bikes would be produced as an initial run, using production equipment that, on the one hand, would have to be cheap enough to make such a small run worthwhile and, on the other, would have to support the production of longer runs.

A frame gauge is an important design tool for all bike builders. Frame gauges are used to precisely position all the individual tubes before they are finally fused together to make a frame. To ensure different frame variants can be produced and that the bike frames can be subsequently removed, it is important that fixings can be repositioned. However, even in countries with cheaper labour costs than Germany, welding together custom designs like these would have cost €5000, if sent to a frame builder. 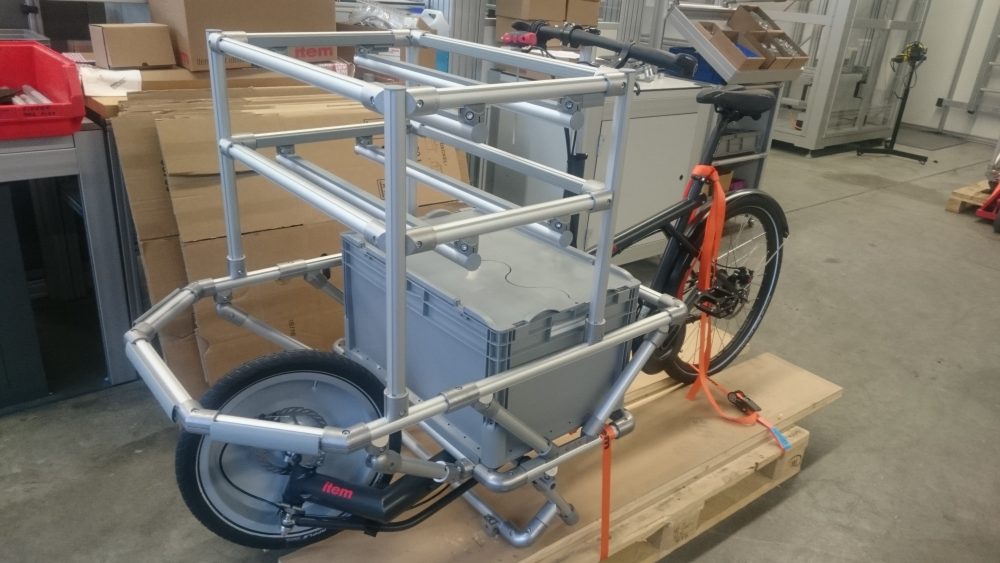 Instead of having frame gauges welded together, Sven decided to make them himself, using components from the item MB Building Kit System. This solution proved so cost-effective that it paid for itself over the planned short run of ten cargo bikes. And, of course, there was no compromising on functionality, either. Last-minute changes to the geometry of the frame to modify certain angles or mount a longer loading platform don’t present any problems when using the MB frame gauge.

This also offers customers very tangible benefits. Thanks to the use of this professional frame gauge and laser-cut tube sets, the frame has become much more geometrically complex and yet easier to build compared to the prototype, which was built virtually by eye. This has helped reduce build costs and improve ride characteristics. 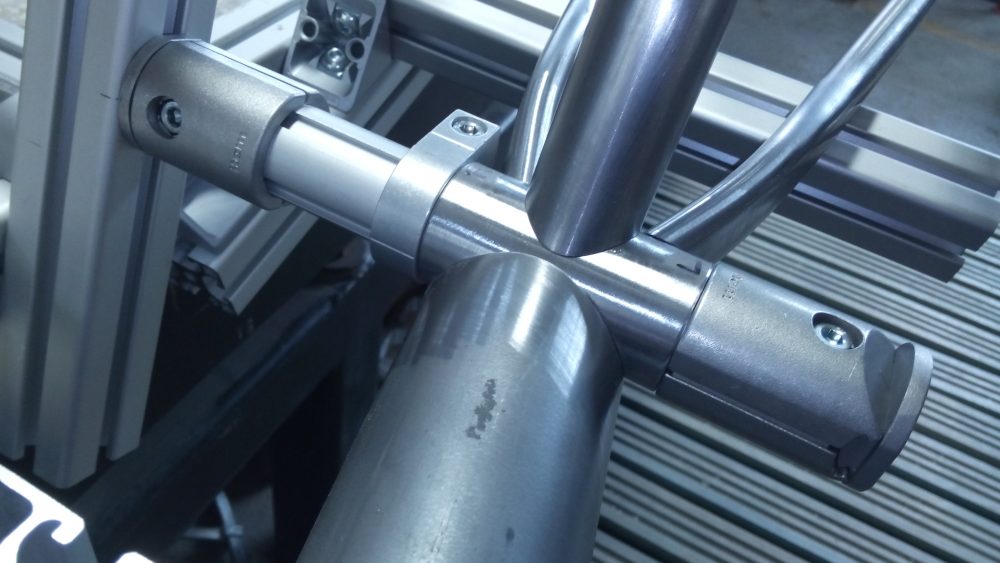 After resolving the issue of a suitable frame gauge, the next step was to look at the bike’s functionality and the custom attachment designs. Here, too, the item cargo bike had to stand out from off-the-shelf alternatives. From the very start, the frame had been designed to accommodate not just the tried-and-tested transporter box with integrated child seat, but also custom loading platforms that could be built using Profile Tube System D30. Simply insert two cross-profiles through the frame and you can continue building on them. This gives customers maximum flexibility, including when it comes to carrying interchangeable containers.

Another element that is always useful when you’ve dismounted your cargo bike is a twin-leg kickstand, although the cost of manufacturing a component like this is usually prohibitive for such a small production run. The solution was to make the kickstand from the stable D30 aluminium system, too. Naturally, exactly what a cargo bike based on the building kit systems from item can do depends first and foremost on what potential customers want. If you like the sound of the item cargo bike, you can contact the manufacturer using the following details:

Want to keep up to date with everything that’s going on in the world of item? Then we have something that might just help: simply subscribe to the item blog by completing the box at the top right! 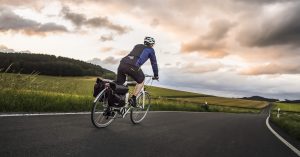 Engineers have been continuously developing the humble bicycle for near on 200 years, inventing new approaches for better drives, lighter ma ...

From compost to couture: Diversity with item

Profile technology is certainly not just for industrial applications. Whether a mobile juice bar, ChemCar, soapbox or Euro 2016 oracle, we’v ...