These examples of CIP clearly show why lean production has taken the world by storm.

How can productivity be boosted in manufacturing? Taiichi Ōno – father of the Toyota Production System, which was the precursor to lean production – asked himself this very question, too. In the 1940s, he realised that automobile manufacturing workers in the United States were nine times more productive than their Japanese counterparts. This prompted Ōno to find a way to reduce waste – and he succeeded. In the context of lean production, this waste is known as “Muda” and refers to processes that don’t create any added value. Muda is one of the three Ms of lean production, along with Mura (“imbalance”) and Muri (“overloading”). All three result in a longer throughput time – in other words, the time required for throughput, which includes production and any waiting times between processes and in the warehouse, for instance. Since throughput time is closely linked to productivity, reducing it often leads to an increase in productivity. This can be achieved with the continuous improvement process (CIP), which is at the heart of lean production. “Continuous” is meant literally here – in the sense of an improvement that never ends and yields better and better results. The following three examples clearly illustrate the potential of CIP for reducing throughput times and increasing productivity.

The 7 Muda also include the transportation process. The way containers are handled in production provides an excellent illustration of why this is one of the types of waste under the lean philosophy. Usually, one employee is responsible for both transporting and assembling the material. However, the assembly work is the only step that generates added value, and handling containers is a constant interruption preventing the employee from doing just this. All of this contributes to a long throughput time. This is where the CIP example of Karakuri/LCA (= low-cost automation) provides a targeted solution. This form of automation generally uses only spring force, gravity and lever principles. There are hybrid forms of Karakuri/LCA that also use traditional drives, like this spectacular example from the automotive industry, but this is an exceptional case.

The implementation of a Karakuri/LCA application is not the only good example of CIP – there’s also the process of continuously improving it.

However, Karakuri/LCA mainly dispenses with pneumatic, electric or hydraulic drives. Using Karakuri/LCA separates the activity that doesn’t add value – in this case, container handling – from the actual value creation. The employee can concentrate fully on the value-adding assembly processes, while Karakuri/LCA takes care of transporting the containers at the same time. This approach can ultimately help boost productivity in production. An appropriate Karakuri/LCA solution can be integrated directly into a work bench to bring the containers into the employee’s handling area. One simple action is all it takes to forward on, restock and remove empty containers – actuating a lever. In order to understand continuous improvement, it’s also important to know that the implementation of a Karakuri/LCA application is not the only good example of CIP – there’s also the process of continuously improving it. 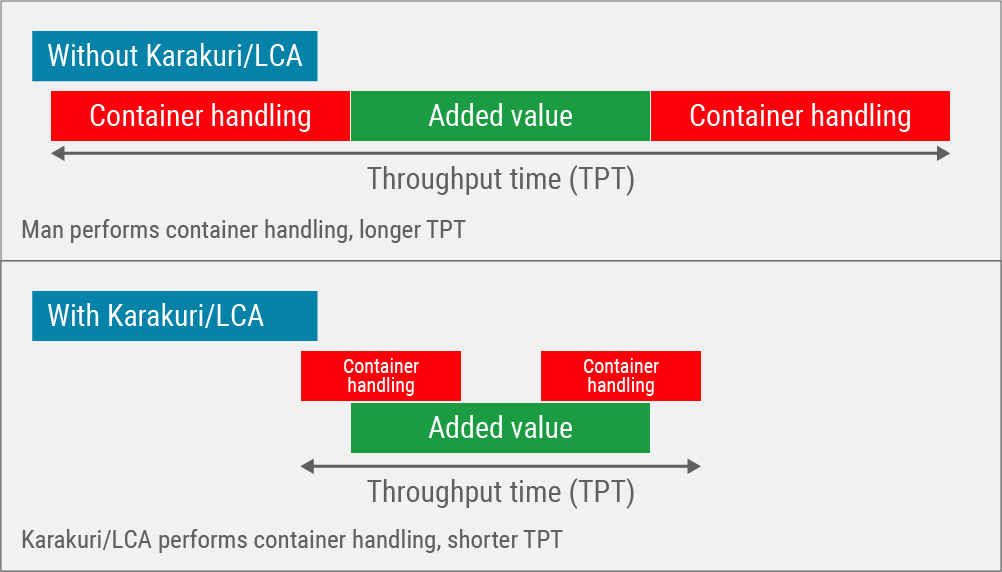 CIP example #2: Boosting productivity in production with the PDCA cycle

The iterative PDCA cycle consists of the steps “Plan”, “Do”, “Check” and “Act”, and is the central method of CIP. This makes it a particularly clear example of CIP. It is also referred to as the Deming cycle, after the statistician William Edwards Deming, who refined the ideas of his lecturer Andrew Shewhart. Toyota took advice from Deming and implemented the PDCA cycle, with great success. The following worksteps are specified by the PDCA cycle, which only ever implements one measure and tests one hypothesis:

Plan: Processes in need of optimisation are identified on site in close collaboration with the employees. Based on the established potential, a new concept is developed to initiate the CIP with a single measure – with a plan for implementation and a hypothesis for the results.

Do: Concrete steps to implement the optimisation are now taken, often in the form of a small and easily controllable pilot project. The implementation is closely monitored, as gathering experience and, more importantly, numbers, data and facts is central to the process.

Check: The implemented measure is subjected to a review: Has the hypothesis been confirmed? If not, what are the reasons for this?

Act: Finally, the implemented measure is evaluated. If it was successful, it is then standardised. At this point, the PDCA cycle begins again, as the process of continuous improvement, of course, never ends.

As the example of the PDCA cycle clearly demonstrates, the CIP is based on an experimental approach. It therefore involves making an assumption and testing it in practice. To do this, adjustments must be made to factory equipment quickly and easily. Profile Tube System D30 from item makes it possible to do just this, as it was specially developed to meet these requirements. All it takes is one fastener and one employee with no special tools to adjust the equipment directly – even at points where multiple profiles intersect. As a result, experiments conducted using the PDCA cycle for increasing productivity in production can be carried out in the shortest possible time. Larger companies often have special CIP workshops exclusively dedicated to optimisations of this kind and therefore require such flexible components. Using a steel tube system, on the other hand, takes significantly more time, as a separate fastener is required for almost every type of connection. Consequently, the entire structure has to be dismantled for each modification.

Unnecessary movements are also one of the seven types of waste. To avoid them, we recommend the 5S method, which in turn is one of the visual management methods. The 5S method consists of 5 individual steps, each starting with an “S” in Japanese. They are geared towards one goal – creating a standardised production work bench that is clean, organised and safe, thus making work easier. This CIP example boosts productivity in production by shortening throughput times, while also reducing the risk of unergonomic movements or occupational accidents. Here is an overview of the 5Ss:

Seiri (= sort): Removing everything that isn’t needed right away.

Seiton (= set in order): Setting everything out in an ergonomic arrangement and labelling working materials.

Seiso (= shine): Thoroughly cleaning the workplace, as this always involves a thorough inspection.

Shitsuke (= sustain): Compliance with all steps and continuously improving workflows and the workplace.

Seiri also involves the use of “red tags” – red dots or tickets for labelling all objects at a work bench. Once these objects are labelled, they are gathered in a designated place (red tag area). If an object is needed, its red tag is removed again. This makes it possible to immediately see what is no longer required and should be removed. 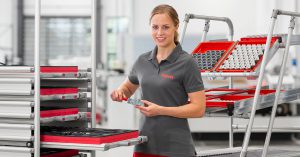 Production management – a comparison of the push and pull principles

Anyone who takes an interest in lean production will sooner or later come across a comparison of the push and pull principles. What do they ... 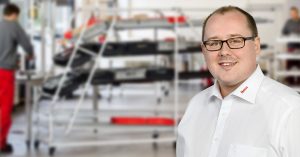 The methods and tools of lean production have been a popular topic on our item blog for quite a while now. They show us how successful proce ...